You are here: Home / Frothy Concepts / Sustainability / A Greener Apple

Steve Jobs and Apple, Inc. published today a statement entitled A Greener Apple describing what they’re doing to reduce toxic substances in their products, and to ensure that the substances used can and will be recycled or reclaimed. Here’s one statement – “Apple recycled 13 million pounds of e-waste in 2006, which is equal to 9.5% of the weight of all products Apple sold seven years earlier. We expect this percentage to grow to 13% in 2007, and to 20% in 2008. By 2010, we forecast recycling 19 million pounds of e-waste per year — nearly 30% of the product weight we sold seven years earlier.” Steve points out that HP and Dell currently recycle about 10%, which is about the same as Apple’s current percentage and he stated that he expects Apple to outstrip these other companies very soon. 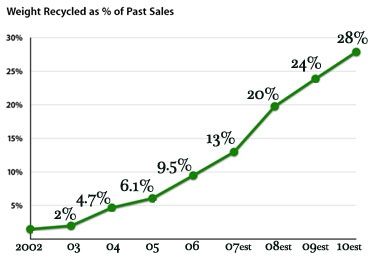 This is good news and a good move toward environmental transparency. It would be hypocritical of us to push the Internet, and computers as substitutes for polluting technologies (especially air travel) and then be contributing repeatedly to the poisoning of the earth!