You are here: Home / Archives for Entertainment and Places / We Blog the World

NASA flew the retired Space Shuttle Endeavour through the San Francisco Bay Area this morning. It was a treat for tens of thousands of us who waited and watched for this very last flight of the Endeavour. It is one of four shuttles going into retirement in the form of permanent exhibits…with Endeavour ending up in Los Angeles.

Using amateur radio repeaters — there were lots of folks watching for the aircraft all along its route — I tracked the flight’s progress from Southern California up past Stockton, where it flew around the capitol building in Sacramento twice, then down the Sacramento River to the Bay Area. The craft made a pass by the Golden Gate Bridge, one around the Bay in a big loop, and then back out straight between the bridge towers. I joined hundreds of enthusiastic fans viewing from Twin Peaks (elev. 800+ ft) in the geographical center of San Francisco. We were nearly the same elevation as the aircraft, which flew between 1,200 and 1,500 feet during the entire maneuver. END_OF_DOCUMENT_TOKEN_TO_BE_REPLACED 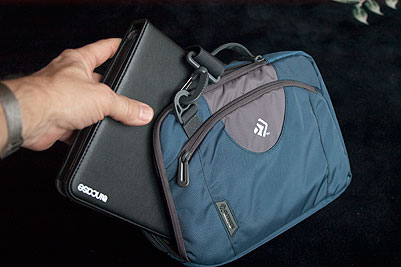 When I got my iPad and started carting it around everywhere with me, it first went into the big backpack along with my MacBook Pro (15”), and since I’m used to carrying 20+ pounds in the pack, adding the iPad didn’t bother me at all. It’s a good workout. And when I’m flying internationally, I take one wheeled bag and the backpack, so it’s standard-issue for me.

However, as I started relying more on the iPad for my mobile life, I realized that I could go without the full backpack[1. At least on business days. On weekends I trek around the city on foot, and I prefer to have some weight on my back just to get a better workout, as well as to carry a windbreaker, sweater and other supplies.]. So I checked at REI and found two items I couldn’t live without[2. I have no connection or contact with the manufacturers, bought the products at full retail, and can highly recommend them after months of use.]. END_OF_DOCUMENT_TOKEN_TO_BE_REPLACED

Without much comment, but with so much enjoyment (as one who uses the Paris metro beaucoup  when I’m there — three times in the last 12 months)… the story of a subterranean world very few will ever see.

I would call them benign explorers and documenters of public territory (my words, of course) and certainly not terrorists, though I’m sure there would be hell-to-pay if they were caught by “the wrong people” and someone wanted to hold them up as examples of how poor security is. But they are urban heroes to me.  😉

I’m certainly not going to tell you the details, but I’ve done my own exploring of locked up places that I shouldn’t have visited (once freeclimbing up the side of a brick building at midnight with no gears, ropes or other aids, checking for unlocked windows, and picking locks), and I know the rush of being there with no intent to do  harm but just exploring spaces that are usually closed off!

Perhaps you’re aware of the outcry among photographers (including myself) about rent-a-cop guards in the U.S. who try to stop you from taking perfectly legal and legitimate photographs in public places (most often near courthouses and federal buildings) — I have been stopped twice by these two-bit uninformed guards trying to keep me from taking photos because they believed there are federal laws prohibiting photography of federal or critical structures (even bridges). That’s not the same as jumping off the platform and running next to the subway tracks, but I couldn’t resist the comparison because it shows the paranoia that exists here in the U.S.

Also see my Art in Public Places articles, and the mixed-reality games I’ve made over the years since 2002. 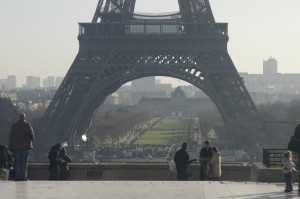 This may be just an artifact of my personal experience, but I think I’m finding that the hotels offering “free Internet” are more often the low-priced hotels than the more expensive ones. At least in Paris and London.

It’s not uncommon to find a hotel over 250€ per night that has a 15€ or higher charge for Internet access. But in the hotels I frequent—I’m fine with just a bed with barely enough space to move around the edges, a shower, and Internet connection, for just over 100€ a night—it seems to be more common to have a free Internet connection included.

Perhaps this is a reflection of younger travelers looking for less-expensive hotels and being attracted like flies (there is one buzzing around my head at this instant here in Paris’ 5eme where I am connected while sitting in the hotel lobby preparing to take the metro to a meeting) to hotels that provide connectivity.

And the true boon is that Skype on my iPhone can connect to the free wi-fi Internet and I can make Skype calls without having to purchase those “overseas” (and overpriced) mobile phone minutes! Quite a difference to spend USD$0.02 per minute rather than $1.29.

{Part of Sky’s series on using tech when traveling} 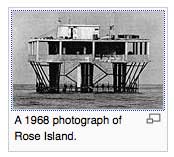 I was browsing the history of Esperanto and discovered Rose Island, a micronation in the Adriatic Sea that declared itself the Republic of Rose Island in 1968. (And whose official language was Esperanto.)

Apparently there have been any number of these escapades, including, of course, pirate radio broadcasters off northern Europe. The story of Sealand is especially entertaining.

Gotta read up on them.

The photo is from Wikimedia Commons and has been released into the public domain by its copyright holder. Click for a larger view.