You are here: Home / Archives for Media / Photography 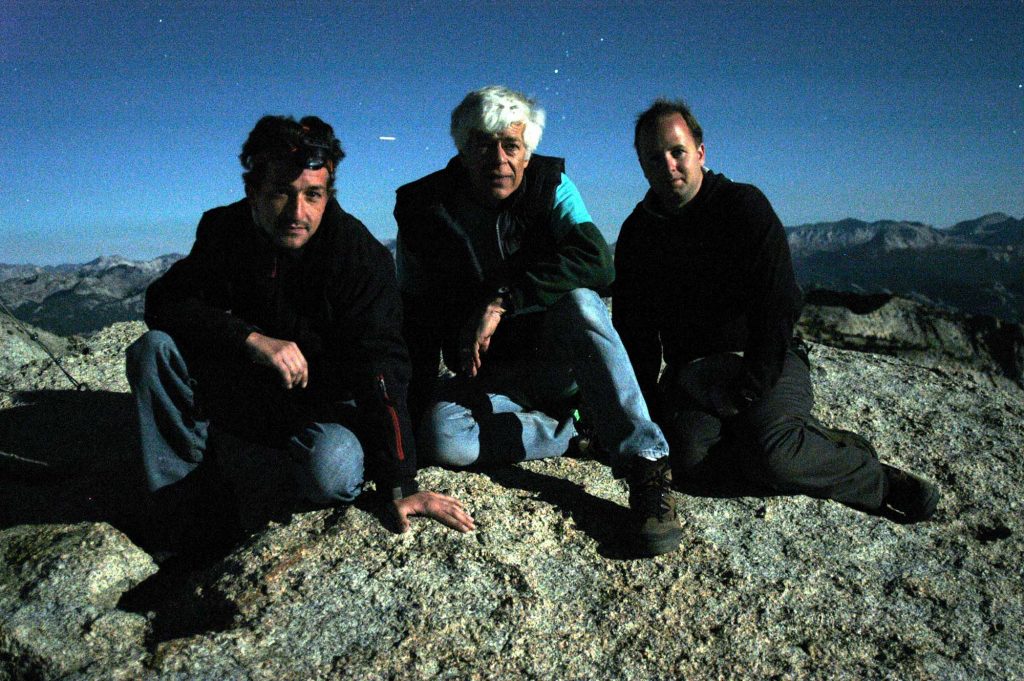 That super blue moon the other night (January 31, 2018) reminded me of a summer Blue Moon (‘roun’bout July 2004, podner) when I hiked to the top of Mt. Hoffman, in the middle of Yosemite National Park, in the middle of the night, by moonlight. With Aaron and Jason. Around 9pm we started up, at first with flashlights because we were in the middle of boulder fields and trees, but within a mile we were out in the open with nothing but exposed granite and sandy trails around us, completely illuminated by moonlight. From there we ascended to the top of the peak entirely by moonlight. END_OF_DOCUMENT_TOKEN_TO_BE_REPLACED 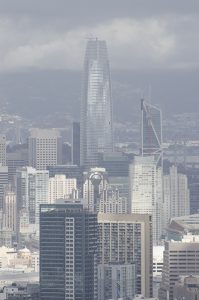 The new Salesforce Tower, in San Francisco, was a not-so-deep hole in the SoMa ground a little over two years ago. Now it’s completely topped out and at night some floors have lights in them. The six or so floors at the very top are also now lit at night. Don’t think there are any residents yet, but certainly soon.

I have really loved being able to watch this project, from just a few miles away, and to be able to walk past the site almost weekly, observing how it has progressed. There’s a great time-lapse sequence, as well as selection of photos by date, on the Salesforce Tower web site.

This photo gives a fairly surrealistic view from near Twin Peaks, which is centrally located in the San Francisco landmass about three miles from the tower.

The building makes its own weather at its 1,070 foot height, disrupting most airflow that has come in through the Golden Gate just a few miles to its west, making its own clouds both in front of and behind the structure. 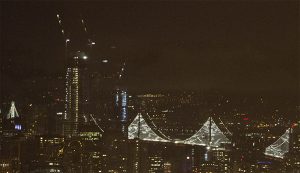 During construction, you could see work continuing well into the night — evidenced by two giant construction cranes at the top of the building with their red lights moving from side to side as beams were hoist into place. In this nighttime photo, you see three lighted spans of the (old) Bay Bridge on the right, then a second tower (blue lights), then the yellowish vertical lights of the Salesforce Tower, with two construction cranes at the top.The cranes and their towers were removed early in 2017.

The Google Maps satellite view today (2017-12-18) still shows the site as it appeared before construction of the vertical structure had begun, approximately August of 2015. 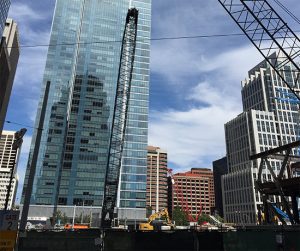 Below here’s my photo of the site before that time with  a yellow concrete rig and other cranes on the still-flat earth of the site before excavation, but after piles had been driven deep into the ground. Behind it on the right in the photo is the steel frame of the Trans-Bay Terminal, a multi-block-long terminus for busses coming from the East Bay and North Bay. That’s a completely other story, with deep excavations and long caverns destined to hold busses and eventually high-speed trains to and from central and southern California. 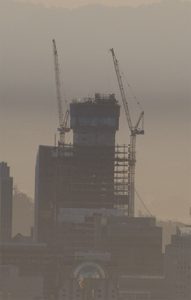 During construction we could view the building rising floor by floor around its concrete and steel core over the nearly two years of above-ground work from including most of 2016 and all of 2017. This pre-dawn photo is from May, 2016.

As the building grew, it was enclosed in blue protective mesh to keep debris in, and windows were lifted, one by one, on the giant construction cranes, and swung into place on every window of every floor. This took place day and night, weekends included, month after month (Photo from November, 2016 before the building had even topped out.) 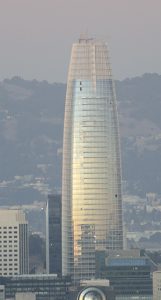 When the glass exterior was completed, the building began to shine with reflections of bright sunsets, reflecting the rainbow hues from light blue above, down to reds and the yellow-red of the setting sun. The building takes on this set of rainbow hues at sunset and dusk most clear days. On other days, it may remain silvery grey, yet highly reflective, all day long.

How do they keep all this glass clean? Yet another story to be told later. My last photo, here, gives you a hint of how they will be doing it. The two devices at the top remind me of window-washing rigs.

I love this photo of  two pelicans that I put on my Facebook banner.  I took the photo a year ago at Ocean Beach in San Francisco. Here pelicans skim the surface of the Pacific Ocean, just above the waves, looking for food in the water below them.

You can see why they say birds are the remaining descendants of the dinosaurs. These guys look so much like the drawings of pterodactyl. Of course even those drawings are fanciful, since all we can go by are fossils. But look at these birds and how they glide just over the waves and surface of the ocean.

I usually don’t think of pelicans as beautiful birds, but this photo (and others I took that day) show the detail of their wing feathers. And I noticed that at the end of each wing are five distinct feathers — like fingers on the end of a hand.

I’m working on a (musical) suite whose working title is Flight. In this work, each movement has a riddle that goes along with it. Here are two of those riddles.

I know of several thoughtful and meditative answers for each riddle.

I was just so astounded to see these unique photos in an email promotion for the Del Sol Performing Arts Organization over the last month. I like Del Sol, and if you’re in the San Francisco area you should check them out (or get recordings), but the photos caught my eye because they (and especially the one on the right of Rick Shinozaki) look so much like what I see when I get an optical migraine that it’s totally astounding. END_OF_DOCUMENT_TOKEN_TO_BE_REPLACED

It has been my plan to make several trips into the Yosemite wilderness this summer in order to visit some places I’ve never seen before. Most tourists have seen Yosemite “Valley” and many have seen Tuolumne Meadows. Access to the wilderness areas is controlled by a “permitting” process that limits the number of people who may enter on a wilderness trailhead each day. There are a couple dozen trailheads, and they have quotas of one to two dozen camper-hikers per day per trailhead. Once you’re into the wilderness area, you can pretty much go where you desire, as long as you have the energy and the food. END_OF_DOCUMENT_TOKEN_TO_BE_REPLACED