Geekiest of the geeks — amateur radio operators! (AKA “Hams”)

I’ve had an amateur radio license since 1958 when I was in sixth grade—back in Illinois. A bunch of old WWII veterans got me involved as a favor to my father (who was one of the “country doctors” for the area). I started studying the electronics theory and the Morse code when I was 10. Their club meetings were held in a smoky room over one of the downtown stores, and I routinely got sick due to the smoky air. Code practice was on the radio once a week, and I could borrow a perforated paper tape “code practice” machine to fine-tune my skills. It wasn’t easy to get the license! 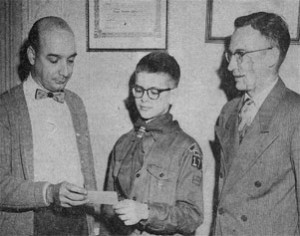 As a geeky little introverted kid, amateur radio was not really my thing, though morse code (CW) was kind of neat and a fun challenge. It also meant I didn’t have to think of much to say. I never was much for small talk.

The image of ham radio operators is that they are the geekiest of the radio geeks – carrying around little hand-held radios, long whip antennas on cars, and the obligatory plastic pocket protector that all nerds use. Kinda true, but honestly you’ll find most of them are just the friendliest people in the world! And a lot of this friendly activity takes place “off the air” at various meetings. And getting involved in civilian emergency preparedness is really a kick. The NERT program, sponsored by the San Francisco Fire Department, has a whole group of amateur radio operators who participate in weekly drills and activities. And the Department of Emergency Management of the city also has a program that involves amateur operators as a secondary channel for the Fire Department in case of emergency (ACS).

What I found after getting more active again here in San Francisco is that it’s an interesting way to meet a real cross-section of folks from many ways of life, professions, interests, and actually it’s kind of neat to see whether a little 5 watt radio can really allow me to be in a mountain peak in the High Sierras (in the summer) and talk to a friend back in the San Francisco Bay Area.

One of my friends here in the East Bay is a true aficionado, and a great “found-items” artists as well. KY6R

Netshare can tether an iPhone? Well, not quite…