You are here: Home / Organizations and Sociology / Cyber-nomads / Building out infrastructure for a Traveling Geeks tour

The Traveling Geeks are at it again. This time the destination is Paris for LeWeb and some other tech meetings.

Organizing a tour for 15 geeks was a nightmarish task for TG Co-Founder Renee Blodgett, who worked for weeks to put this one together – much shorter lead time than for previous tours. And her co-organizers Eliane Fiolet and Phil Jeudy, plus two web developers, did a heroic job.

The online developers were tasked with creating the new web site, but I came in for the last few weeks to preside over one of my (current) specialties –  ensuring that we can mash information together in real time. Here’s what it required and what I learned: 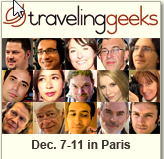 This trip is largely a different set of geeks than for the UK, with only Renee Blodgett, Tom Foremski, Robert Scoble and myself overlapping from the summer UK visit.

Pickup geek’s writing from their own blogs: The biggest issue is to create a central web site that incorporates information from all of the geeks while they’re on the road. You can’t ask busy people to write up duplicate posts for a central blog — they’re busy writing for their own blogs. So the answer is to syndicate their blog posts — pick up posts from their blogs, copy them to travelinggeeks.com and insert them there, with a minimum of fuss. Ideally this is a 100% automated process. Well, surprisingly, this still is a very hand-built kind of process, although once you’re done, it can run 100% automatically. Underneath everything the site is built on WordPress, which supports blogging as well as more “static” pages.

There’s a neat WordPress plug-in called FeedWordPress[1] that lets the blog read RSS feeds from each geek blog and copy the relevant posts over to the TG blog for republication. But things have gotten more complex since the geeks visited London… now we need to not only bring in blog posts, but we need to deal with Twitter streams, Twitter hashtags, Flickr photos and YouTube channels. Our “bloggers” are no longer simply bloggers.

Mash multiple feeds together: OK, so some of our bloggers have several places where they interact online. The trick is that most of these now present/expose RSS feeds, and you can read and manipulate data from those feeds to create a single mashed feed that contains only the information that you want to use. Yeah, Flickr, YouTube, Twitter, all present RSS feeds that let you get at your photo-stream, your video-stream, and your tweet-stream. The trick here is to use Yahoo Pipes[2] to mash them together. Pipes will read multiple blogs’ RSS feeds, check to see if there are blog entries in a particular category, and then mash only those articles into a new RSS feed that Yahoo Pipes creates. The system is so flexible that not only can it recognize categories, but it can search through the text of a blog entry or any of the other characteristics that typically appear in an RSS feed. If one of our geeks has, for instance, three feeds, Pipes can filter each feed according to different criteria, and then can merge them together into a single feed, with things interleaved chronologically, that I can have FeedWordPress read and digest. (FeedWordPress can’t do this mashing of multiple feeds…)

Mashing the geeks’ photos: On the UK trip we used a couple of tools to help manage photos. One of those was MobyPicture, which lets you upload a photo once and have it copied to your accounts on multiple online photo sites. It’s particularly useful for mobile phone users, and there’s also an iPhone app, which I find very handy. Though I do love Moby, on this trip we didn’t need this kind of multiple uploading, so we gave all of the geeks access to a Flickr group Traveling Geeks, making the membership “Invitation only” but the viewing “Public.” They’ll upload to their personal accounts, mark the photos for the group, and we use the flickrSliDR slideshow maker to then include all photos, even the most recent, in a slideshow.

Zorap: This hot media-sharing space provides video, audio (mp3), photo and other media sharing within a common space (a room). The tech is rather demanding, so it’s not for the faint-of-heart and you’d better have a fast computer, but when it works it is marvelous. Multi-way (not just two-way like Skype) video conferencing is coming of age.

We are counting on broadly-available wi-fi support at most of the venues in Paris. Orange is supplying us with 3G connectivity to fill in when we can’t find wi-fi. Over the last two days (on my way to Europe) I have used a 3G iPhone tethered to my MacBook while on the California Zephyr (rail in the US) for 5 hours, and wi-fi on American Airlines (excellent bandwidth) within the US. So more and more I’m becoming accustomed to haveing a connection wherever I go.

[1] FeedWordPress main site (with info and download). The developer could use some donations – I donated – so if you like and use this plug-in, please donate.

[3] Yahoo Pipes has a problem with Typepad-generated “categories” that took me some hours to puzzle out. Typepad “categories” have an extra layer that appears with the XML of an RSS feed that makes filtering impossible if a post has more than one category. Rather than create a whole inscrutable article about it, let me point out that a solution has been developed, which consists of breaking the categories out into a list and then processing the elements of that list rather than trying (unsuccessfully) to parse the malformed feed. I’ll have to write an article on this later.

All those watches! All that bandwidth?

Companies must go where their customers are