You are here: Home / Organizations and Sociology / Communicating / Computers And Teaching 1973 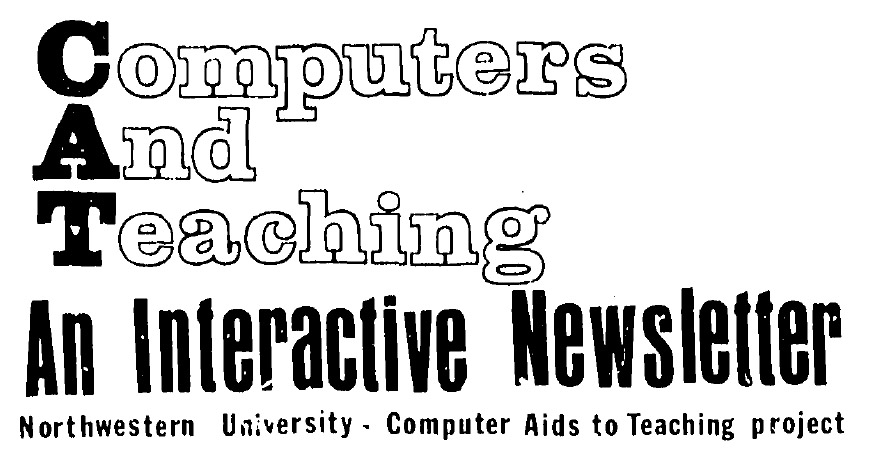 I just reviewed the seven archived newsletters of my Computers And Teaching [CAT] project, written in 1972 and 1973. During that time I led other graduate students, faculty and staff at Northwestern University and the Vogelback Computing Center (a big centralized supercomputer facility) in promoting online educational uses of the computer. There was no network to speak of in those days…computers were just beginning to be able to “dial up” and chat with each other, and the computer terminal was still remarkably new. I was a new faculty member, having just completed a PhD in Computer Science, and my mentors were Ben Mittman (that linked page includes a tribute from me in 2007) and Claude Mathis, who headed unique centers within the university.

I made some guesses about the “cottage industry” that access to computing might support in the future and a lot of them were right. Um, actually everything in my article is commonplace today…

Here are some of the things I wrote. They’re based on conversations I was having with many people at the time, so they’re not all my own original thoughts, but look at how many of them we’ve been able to realize by 2017!

The article is entitled COTTAGE INDUSTRY (download PDF) and is a forecast of what’s to come, viewed from 1973.

First, I proposed working from home (in your bathrobe or whatever):

As our economy moves more and more toward services and farther away from manufacturing, people find themselves doing tasks they could really be doing at home, if it were acceptable. Take programming a computer with time-sharing, the programmer could work from a back room, and could work any hour of the night or day.

Or, if one felt the desire, it would be possible to set up neighborhood work-centers,’ where people gathered to do their work and drink coffee. Communication would be carried out on the telephone or picturephone. “Paper” based jobs would be carried out in conjunction with computer communication systems, in which the computer stored all information. Letters would be written by typing them into the computer then when the recipient signed-on, the letter would be printed on his terminal. A secretary could be located in Chicago for a boss in San Francisco; the secretary would handle communications and route letters via computer to the boss, who would dictate a reply. The reply would then be played back automatically when the secretary called the boss later in the day, typed into the computer and routed to the originator.

Is this a pipe dream? Perhaps not! There are people in telephone companies today who look forward to the day when all calls will be included in the monthly charge. It would then be advantageous to work long-distance. The telephone network would hold your calls, record callers’ numbers, route your calls to another number, or “camp” on a busy line. Once the computer has been connected to this network, just imagine the possibilities!

When PLATO-IV plasma-displays get down to $700 each (roughly the cost of a color TV console), people will begin to think of buying them for their families. Learning will take place in the evening, after school and during lunch breaks. The school may have to take on more socializing tasks — teaching kids how to deal with each other and how to settle disputes.

They may begin seriously trying to direct a student’s inquiry, starting neighborhood study groups oriented toward solution of local problems. And the giant communication network may be used to form larger nationwide task-forces of people, communicating via the computer.

One of the first incursions into interactive computer controlled networks is the TICCIT (say “ticket”)system, by MITRE Corporation. This is centered around a cable TV system in Reston, Virginia. The cable TV will be computer controlled, and will provide information and educational materials to citizens on their own television sets, as well as regular TV fare. Signals are sent to the individual TVs in the homes of children studying lessons, displaying information much like that PLATO-IV will display on its screens. The child presses a key on his telephone to respond. Eventually keyboards will be included. Shopping can be done the same way. Items are displayed on the screen, and buttons are pushed to order. Information of community interest can be displayed, and citizens can even vote on issues.

TICCIT is designed to be a local system, comprising a few hundred homes. Can you imagine what could be done on a truly large system such as PLATO-IV with thousands of homes? It could change the structure of society.

Well I definitely missed cell phones. I almost missed personal computers because of my focus on terminals, although a couple of years later (say 1976) I knew about KIM-1 and other kits, which presaged this. I missed hand-held phones and tablet computing and such. I missed the entire software ecosystem that has grown up alongside those technologies, although my next two company startups transitioned into personal computing rapidly. Also, by 1977 I was working with PDP-11/43 systems, which reduced the mainframe to small-room size, and racks of dial-in modems for remote users. So still terminals, but by 1978 I was focusing on the Apple-II, which was the real game-changing device for all of us.