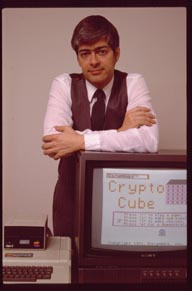 Chapter 4 of 7 in the DesignWare history thread.

In 1976 I was doing my thing to advance online medical education. Using minicomputers and video terminals at Pacific Medical Center in San Francisco. And creating my CDS system which made it possible to run the same courseware on many types of computers using many different computer languages.

A couple of years later when I was leading the very small office of WICAT in San Francisco, I was introduced to the world of personal computers. I don’t know whether it was 1978, or 1979, or even 1980, but I heard about Apple, cold-called them, and they said “You have to talk to Steve.” I didn’t know Apple, and I didn’t know who Steve was. I found out.

We know now the importance of that initial Apple computer.

Steve Jobs wasn’t even the proverbial guy in the corner office. That was the head of marketing and sales. Steve Jobs was in the next office over to the left, sunny in the morning, cooler in the afternoon. But that’s where the action was. Steve was enthusiastic about education, and learning. And was convinced the Apple II should be in every schoolroom in the country. I agreed, though I thought of the Apple II as more of a terminal. They had not yet brought out Applesoft Basic. Initially I programmed it in Hex machine language from a rinky-dink console application. A month or two later I got one of the first Applesoft Basic cards. And memory was 48k. Not 48mb. Not 48gb. 48k. There was no disk drive.

Steve asked “would you help us evaluate which disk operating system to use?” He gave me contact info for Shepardson Micro and for Microsoft, which were the contenders. I visited Shepardson, which was local. I called Microsoft at 8pm one night, and talked to “Bill” — I recollect that I called him in Arizona at the time. Long-distance was expensive in those days. As you know, Microsoft did not get the gig, and it was not due to anything I did, but it was fun being there at that particular time and place.

One morning I drove Steve over to see a PLATO-IV terminal at Control Data (they were commercializing PLATO-IV at the time). He didn’t have a car. He liked my Volvo and we talked about that. We talked about the potential for computers in education. More than about just the tech, the potential for ubiquity. We saw PLATO. Actually it was conceptually nice, but the Apple II was pretty exciting and way less expensive.

At a very early point, Steve was supportive of my ideas about putting PLATO on an Apple II, but couldn’t give corporate support. (Other folks tried to convince him about PLATO…none succeeded.) So he took me out to the back where Apple II computers were coming off a production line. He picked up a computer and handed it to me as his contribution to the cause. (I heard later that he had been reprimanded and told “This is the last time you’ll do that.” by another executive who I shall not name.) It was serial number 2515, and served as our development platform and later as a testing platform for several years.

I also knew several people who were working on developing a similar personal computer for Atari. Primarily Joe Schlessinger, Joe DeCuir and Ed DeWath. I showed up on their doorstep and learned of this incredible computer that (patterned on knowledge they had from coin-op gaming) had an independent chip running the display. You could just change certain memory locations and change characteristics of the display, and contents, almost magically. You could reconfigure part of the screen as low-definition and part as high-definition. (On the Apple II you had to select one or the other mode and then bitmapped memory onto the entire screen.) I think you could also set a color palette. There were sprites which were little patterns that could move around the screen without destroying the background images. Wow!

Visiting Atari, I met Peter Rosenthal who was handling marketing at the time. 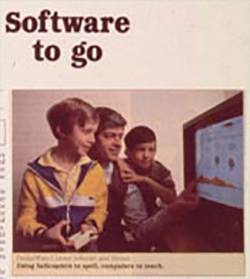 As always, my concern was with writing educational programs that could “run everywhere.” So these early days of 1979 and 1980 were a paradise for me. Apple, Atari, Commodore, Tandy, then IBM all came into the market quickly over the course of about 4 to 5 years (by say 1983). Software was fragmented. They all used BASIC, but it was different on every machine. Displays were all different. Input and output devices were all different.

FORTH saves the day

CDS was a possibility in terms of building programs for DesignWare, but it was too focused on computer-based-instruction types of interaction. Question-answer-question-answer, remember? With personal computers sprouting up all over the place, we needed to program bright colorful cartoonish interactions, with lots of motion. CDS wasn’t going to cut it. So I began figuring out how to write this new type of interaction in BASIC, and early in the game one of our programmers, George Kaplan, came to me and to Lesley Czechowicz with the programming language FORTH. Wonky it was! FORTH was a stack-based language, and you wrote programs in reverse polish notation. It was highly modular. It ran on every microcomputer. Let me repeat, it ran on every microcomputer. You just needed a small interpreter kernel that was native for each computer, and then any FORTH program could run. There were graphics libraries. There were input and output. You could control the floppy disk and the tape. It was cool. It was super-geeky. The Wikipedia article on FORTH is the best in terms of explaining what it was like at that time.

George knew of FORTH because he was an astronomer. Though when we hired him, he was working as a parachute packer in the East Bay. Astronomers, as I understand it, were using FORTH to control telescopes. George was an astronomer. We were giddy with the discovery of this universal tool. Um, the language I mean, not the telescope.

So after some consternation, and especially worrying about the reverse polish issue and the difficulty it can bring to coding, we began writing every product using FORTH.

In the next article I’ll introduce the team and tell you how DesignWare evolved. You’ll see why all of my background culminating in CDS, and then George’s introduction of the FORTH platform, which provided write-once-run-everywhere capabilities for our software, was so important. [Press onward through the years…] [Or return to the start of the story]