I sat down in a coffee shop in Berkeley (CA USA) a week ago with Jonathan Kathrein, the founder of Future Leaders for Peace.

FLFP conducts workshops in schools – from grade-school thru college – their workshop lasts 90 minutes, including a video, to capture attention and inspire; it starts with interviews of people the kids can relate to, from sports figures to real people, and continues to Jonathan sharing his stories, including the shark attack he survived at Stinson Beach in 1998; proceeding to then get the kids to share their own stories in small groups of 8 or so – their challenges and conflicts and experiences. To paraphrase Jonathan – It’s amazing how similar their challenges are and yet each one thinks they’re unique – by sharing, they learn how to better approach and overcome adversity in their lives. 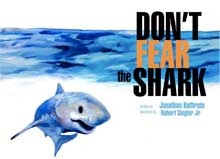 Jonathan has also written a children’s book Don’t Fear the Shark – a story of his shark attack, but one in which the shark is a bully mistreating humans because it has been mistreated itself – the story looks at how the cycle of violence arises and can be prevented. As he says, the story ends abruptly and the reader has to figure out how it would or could end.

Jonathan is also a hard-working member of the organizing committee for Educators For NonViolence.