You are here: Home / Organizations and Sociology / Cyber-nomads / I’m a Turtle

I’m listening to Neil Goldberg talk about “The future of work” while I’m writing this. Neil created and operated the Gate 3 Workclub, which lasted until early 2005 in Emeryville, CA. Gate 3 was a place where people could “hotel” and drop by and work (for a monthly fee). (You know, kinda like Starbucks without the hassle factor as they try to chase you out because you’re taking up space.)
Neil is a designer, and (wow) Gate 3 looked very designed! He worked thru many issues about what made a great workspace, including not only the physical layout, but the social aspects – which are SO important! “Water-cooler conversations,” anyone?

All of this is familiar to me, because in 1973 when I was founder of my research project Computers And Teaching [CAT] at Northwestern University, much of what I wrote about was how education would get more decentralized, and people would both work and learn based in neighborhood centers containing computer terminals. Those of you under 35 might want to look up computer terminal in Wikipedia because you hardly ever see one of these anymore … But, in 1974 when I was first writing about how computers would change social interaction, the Plato-IV system was the big thing in education, and it had nearly 4,000 terminals scattered around the world with people “learning” around the clock and around the globe 24/7. I had an early PLATO terminal at my project.

Of course, in 1975 this all changed, with the introduction of the KIM-1 and other computer “kits” that I (and others) immediately recognized had the potential to change the whole complexion of “online” learning. By late 1978 I was trying to cram as much of PLATO-IV into an Apple II as I could, and Steve Jobs gave me Apple II #2515 with which I began this effort.

But, back to this post – Neil is continuing to discuss the physical location of work in his talk, and I want to steer this in a different direction and write about how knowledge-workers like myself actually do their work “inside their computers” rather than in any physical workspace. At this moment I’m in Palo Alto, at the offices of The Institute for the Future, where I’m in a room with about 30 people, listening to Neil, and my “work” is still right here inside my computer! I carry it with me everywhere.

In another sense, my computer is also not the location of my work. It is the communication device (a “terminal” again) that allows me to access, via the Internet, my work which is much more distributed – not just inside the computer. I have a couple of Internet servers in a hosting facility in San Jose – both of which are constantly monitoring each other (and they can notify me of trouble while I sit here in this meeting).

This, by the way, was one of the hardest “explanations” I have ever had to make to my mother as she aged. Coming from a world in which “work” was done at the office, and everything else was “home,” it was impossible for her to understand that I could perform “work” tasks when I was far away from my office (thousands of miles for sure) and also that the computer that she associated with “work” was in fact my window to the expanded world and that only about half of the time that I spent with the computer was actually what she would call “work.”

Hmmm, that does remind me that the reverse is also true – namely, “home” also expands and invades the “work” environment. Many of my employees used to spend beaucoup hours on non-work tasks when they we at the office. And the IT department was always making decisions on which web sites should be blocked so workers could not access them from the office. A cat-and-mouse game of grand proportions. So where you “work” is a two-way street, isn’t it?

In the future, of course, the locus of work will be yet more distributed. Even more of us will be working from portable computers (and are today migrating to much smaller devices that give us wireless access to our “work desktop”) and as this continues to spread, the “objects” that constitute our “work” will reside at some location we can’t really identify – they won’t be on the computer itself – they’ll be on a server, or many servers, out on the Internet somewhere. 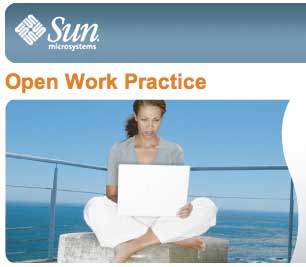 For example, Sun Microsystems has an i-work program where the work desktop follows the worker to whichever workstation they log on at. Here’s Sun again, written up in The Future of Work.

So I mentioned Starbucks (read in any chain or individual coffee shop you want) early on. We all try to take our computers into the these places to maintain our connectivity. And some coffee shops go along with us and others resist (they crank up the music to speed us on our way). We all wonder why Starbucks hasn’t picked up on this and provided “business centers” already, don’t we? There are increasingly more localized efforts to create citizen-oriented centers where you can plop down to do your “work” in an environment where there are others aroung. One of these, Citizen Space, was represented at our IFTF gathering – and they’re building South-of-Market workspots in San Francisco (also see this description of their space). There’s a lot of blog-chatter going on about this kind of thing. There’s a list of co-working spaces on the co-working wiki.
Why is the title of this post “I’m a Turtle”? – because I take my home office right on my back with me wherever I go – it’s in my computer, in my backpack, and my computer is also my gateway to the Internet which is where my “factories” are.

What does the “World’s largest table” have to do with ethics?