You are here: Home / Debris / As the mouse turns – Are you twisted or are you straight? 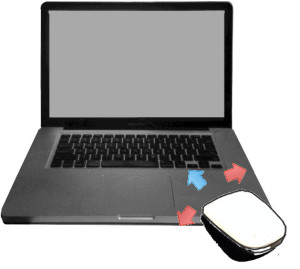 Are you “straight” or are you “twisted?”

You’ve probably never thought about this, but if you are currently using a mouse, take a look at how the mouse is positioned with respect to your screen. Is the mouse pointing straight away from your body, or is it twisted around to point directly at your screen?

If you’d like to review where the computer mouse came from, check out Doug Engelbart’s big demo in 1968 — later Doug and his crew demo’d the mouse for me in 1971 or so at SRI. Mice have come a long way since then. 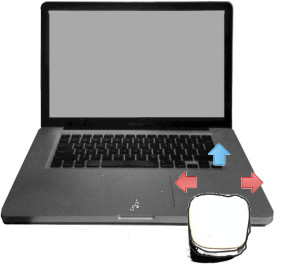 I find that my mouse position is intertwined with my relationship to the screen. I think I subconsciously feel an invisible “beam” coming out of the mouse and hitting the screen to move the cursor. Kind of like a lever, or a laser pointer, or a stick, or I don’t know what. I think I have always just wanted to point at the screen, or touch. But, yes, I think it has to do with my kinesthetic sense of the mouse and the screen as one device, not as a separate object controlling a cursor on a disconnected screen. My friend, David Thornburg, once required to this action as “trying to draw with a brick in your hand.” At the time he was working with Koala Technologies, which had just come out with a Muppet-themed keyboard and touchpad for the Apple II and other personal computers. Yes, this was in 1984! Thirty years ago.

The alternative to being a mouse twister is to keep the mouse pointed straight ahead (second illustration). In this scenario the mouse is out to the side of the computer (I’m mostly right-handed, so it’s over to the right) and not really pointed at the screen. It’s pointed “straight ahead.”

Which of these is your favored configuration?

I will tell one story about the mid-1980s, when mice were very, very new.

On Macintosh systems we frequently heard that our software users, who were truly newbies, of course, to this mouse-based and cursor-based paradigm, were unable to move the cursor left and right properly. When we observed what they were doing, we found they were twirling the mouse around its central vertical axis, which of course caused no left-right motion at all…just turned the little tracking ball on the bottom, or not at all, in unpredictable motions. Once we got them to understand they had to sweep the mouse left and right, they at least understood what was going on, though sometimes they still couldn’t master the motor skills to make this happen.

What we did to straighten them out, was to get them to point the mouse straight ahead, not pointed at the screen. This freed up the little ball under the mouse so it would work properly. (Today’s mice are more generally reflecting light off the surface of a table or pad, not rolling balls around.)

These days, of course, everyone can either use a mouse or has transitioned to some other pointing device anyway. I am convinced that the computer mouse will be solely a historical relic within 10 years.

Corollary: When you use a touchpad or tablet, does your hand come straight at the screen from the “bottom” or is it coming in from the side or even the top? Remember that you can’t rest the heel of your hand on a touch screen when you’re touching a spot near the top, so you are forced to keep your hand floating above the screen, or come in from the side, in many cases.