You are here: Home / Our networked world / Net Neutrality — The Issue is Bandwidth

The Internet is a network of networks. An Inter-Net. (And keep in mind that the Internet is way more than “The Web” which is just one service running within this gigantic infrastructure.)

The Role of the ISP — Individuals and companies who have their own networks interconnect those nets by plugging in through Internet Service Providers [ISPs]. And in turn, each ISP is linked to “upstream” network providers, and through those to a group of very large carriers who form what’s called the Internet backbone. It’s not just a two-dimensional backbone, but itself is a distributed network of very-high-speed carriers with real-world physical interconnection points. There are many possible routes from an end user to another end user through this backbone. The big providers do what is called peering at these interchange points, where they are all peers, handing off traffic from one to the other with the flow based, of course, on how much traffic is going in any given direction, but otherwise “equally” in terms of priority.

There is, of course, nothing to prevent companies from creating their own private networks to route their traffic faster or more directly than the Internet can route it, but the flexibility and particularly the ubiquity of the Internet makes it ferociously attractive even for private data exchanges.

Each ISP collects fees from its customers, and it then purchases its upstream connections (meaning connections “closer to the backbone”), paying more or less based on the bandwidth of those connections. That’s how upstream ISPs make their money. And they pay the backbone providers for connections. And so forth.

Bandwidth — From the earliest days of the Internet, ISPs have provided service based primarily on the bandwidth (bits per seconds) provided to customers. 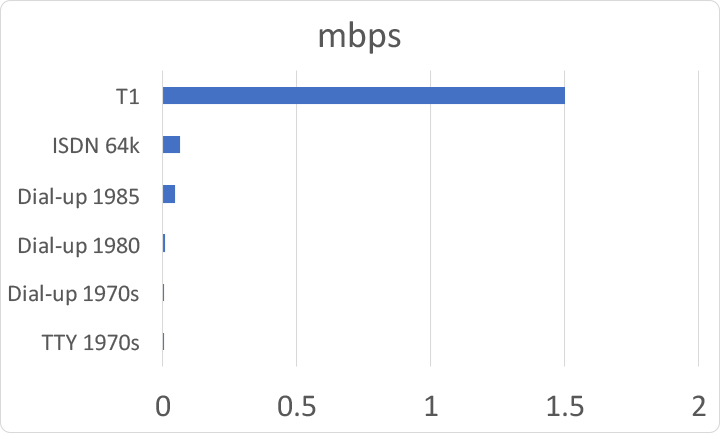 In the 1980s, a regular guy like me might buy dial-up service, which could run at maybe 1,200 bits per second [bps]. My blue graph illustrates relative speeds from dial-up on the bottom to T1 dedicated service on the top. Dial-up services (which includes ISDN)  reached higher speeds with better equipment (called modems – which connected a computer to a phone line). Even higher speeds could be achieved with dedicated lines rather than dial-up. ISDN reached 64,000 bps, but required two dedicated pairs of copper wires. The “T1” line, spoken of in hushed reverent tones in the 1990s, was a repurposing of the phone company’s internal T1 lines, which bundled 24 basic lines together into a single channel at about 1.5 million bits per second [mbps]. 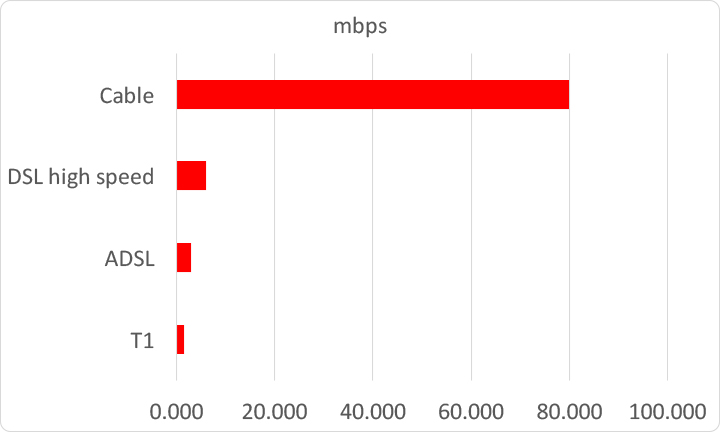 As digital services proliferated, the T1 became less useful, with DSL and ADSL speeds several times faster, and consumer cable Internet going up to nearly 80 mbps at the fast end of that spectrum. My red graph shows the T1 at the bottom end of the data services at 1.5mbps, and cable Internet at the top with around 80mbps. There are also fibre services where the speed of cable is kind of the low starting point, and service may reach 1,000 mbps (1gbps) at the top end.

Ah, but my point is that ISPs used to really sell bandwidth and your monthly price would be linked to the speed of your connection to your ISP.

Bandwidth and Capacity — As with any network that carries traffic — think interstate roadways, for example — a network is built with enough capacity to handle only a small percentage of the total possible traffic. Otherwise, the vast majority of routes would remain almost empty most of the time.

Engineering a Network’s Capacity — So there’s an “engineering” problem that always has to be solved — deciding how much capacity to actually build or turn on (to “provision”). (But look up the term dark fibre sometime if you want to know more.) Carriers need to be able to handle realistic peak traffic, but not maintain excess and therefore unused capacity.

Managing Network Traffic — And when a network gets close to capacity, the network manager wants to manage traffic in some way to avoid complete gridlock. In fact, large network managers claim that this is the primary reason to eliminate net neutrality – because they claim it hampers their ability to shape traffic when it peaks.

Why Limited Bandwidth and Net Neutrality are enemies — So carriers want to be able to prioritize (”shape”) traffic (and presumably charge someone more for priority traffic). Makes sense, huh? If the network is clogged, wouldn’t you as customer want your real-time video or audio calls to get through. And wouldn’t you agree to postpone delivery of spam, or delivery of traffic that’s not time-critical? That’s the genesis of the term Quality of Service [QoS], which deals with finding ways to ensure the delivery of high-value communications. But the question is who sets the priorities. Certainly one user would like to prioritize his video or audio. And another might prioritize her online real-time gaming. So here is the one crucial sentence in my argument:

With net neutrality, traffic only flows freely if the channel has enough capacity to handle all traffic — because prioritization is ruled out.

In other words, to belabor my point, if there were no principle of net neutrality the carrier could prioritize and give more timely delivery to the prioritized traffic.

And to belabor my further point, if prioritization is allowed, carriers can and will charge more for it, will make special rules that benefit themselves (and their associated companies and services), and will begin restricting other traffic. This is the origin of today’s whole hullabaloo about net neutrality. (And with which I am in agreement, as you can see.)

So in a nutshell, this is why carriers don’t like net neutrality:

This leads me to predict some pretty clear scenarios for the future — some Post- Net Neutrality scenarios. You can envision your own, then read on in my next article.