You are here: Home / Our networked world / Reaching Theoretical Broadband Link Speeds (in the US) 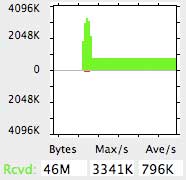 I’ve just spent 48 hours “beating myself up” over the Comcast (cable) high-speed Internet system here in San Francisco. I say beating myself up because I was so convinced the problem was Comcast that I spent hours on the phone with them, but ultimately most of the problems were in my own network. [Not all, but most.]

In US cities, the license to install and operate cable television networks is a city-granted monopoly. When cable TV was first being installed, each city opened a bidding process, and cable operators bid to be granted the franchise to install and operate the cable system in that particular city. If they won it, they then had exclusive rights. So in San Francisco, we have telephones provided by AT&T (which originally was Pacific Bell Telephone Company) and we have cable TV provided by ComCast (only – no other provider). Satellite TV lies outside this structure and is available everywhere on a competitive basis, but that’s a different issue.

Comcast also delivers Internet connectivity (and telephone service) via their cables. And that’s the rub.

Comcast suggests they can deliver broadband speeds of up to 12mbs (megabits per second). This kind of speed is pretty good, actually, and is lots higher than I can get on shared office connections at my client sites. It’s also faster than wi-fi can provide, so if you’re using wi-fi on your computer, the Comcast speed is kind of a moot point…it only affects me if I’m plugged into an Ethernet connection in the wall.

The thing I wanted to point out is the graph above showing (left to right) that Comcast give you huge speed when you first connect and start downloading a file (for example) and then it slacks off to a slower speed. It gives you the impression of quick download by starting the transfer really quickly – and if the file is small, you‘ll get it quickly, but the rest of the file comes in at a more leisurely rate, although it is in fact pretty close to the advertised rate. In my case the rate was just under 8mbits/second.