You are here: Home / Entertainment and Places / Art in Public Places / Rock on, rock on, Bill Dan 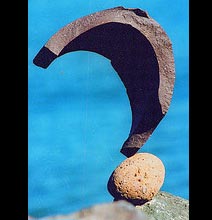 It’s been a few years since I saw Bill Dan in action, delicately balancing rock on rock on rock at Crissy Field. And then I noticed his absence. A year or so later, I spotted him on the street one afternoon (near my home) and asked if he was still balancing, and (my recollection is that) he said the National Park Service had asked him not to balance rocks (at Crissy Field) for “insurance” reasons, but that he was teaching “classes” in rock balancing. Don’t know what he is doing today, but his work had certainly become one of those things that you’d visit Crissy Field just to see in action. [the photo is from Bill Dan’s blog.]

Bill’s blog holds a gallery of really inspired balanced-rock sculptures that you have to see to believe. 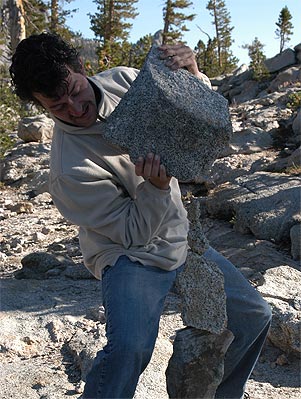 Bill’s work inspired Aaron [in  the photo, 2005] and me (a few years ago) to create some balanced-rock sculptures in the High Sierras. This was a ton of fun!

The trick in our case was to use granitic rocks that contained lots of hard particles – rather than the “pointy end” of a rock being a needle-sharp point, it is actually a whole bunch of flinty points, and you know that since 3 points define a plane, this makes it easy to find a way to balance each rock on to of its supporting partner below it. You find the center of gravity of a rock by hefting it, then you roll it around until you can get that center of gravity above the point (which is pointing down) and you gently set that point on the supporting rock below. Some delicate shifting, and walaa(!) you have added another rock to the growing sculpture. 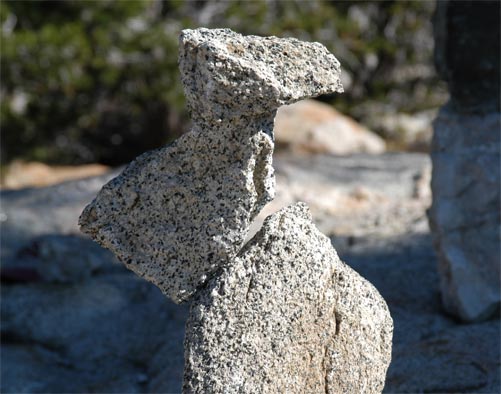 It surprised me that I could build sculptures that would hold up even in the face of strong winds. I left a couple of these towers standing while I went away on a day hike and they were still there when I returned. Lots of fun – try it yourself.

Where do you feel at home?

Growing pears in the shape of a Buddha