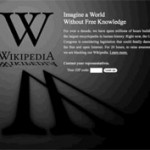 If the US were to institute laws that allow the Attorney General and/or companies to force ISPs to block (or modify the DNS for) domains they assert are in violation of copyright, it would be the beginning of a slippery slope which could well lead to blocking (censorship in effect) for other reasons. There is just not enough due process in these proposed laws. Once the mechanics are in place, it would be easy to justify using them for other purposes.

I was most impressed at the action taken by Wikipedia on January 18th (2012) to make their service unavailable (except via mobile and for certain pages). And Google did a great job by blacking out their logo, leaving their search intact, and providing links to further information, including pages to reach Congresspeople! Craigslist.org also put up a splash page, which I think sent many people in the right direction. Craig Newmark, founder (and customer support) of Craig’s List is very much involved in citizen democracy (“democracy 2.0” if you will). I put up notices on my own sites, and on my friend Amy Jussel’s ShapingYouth.org on the 18th, directing peoples’ attention to the SOPAstrike page. I was also impressed that

The key is to not require that ISPs or search engines be the enforcers of government policies, and to not wreck the DNS (and DNSSEC) system by spoofing (even legally) domain names.

I believe Wikipedia and Google turned the tide, and am hopeful that these misbegotten bills will now be abandoned or completely rewritten to make more sense!