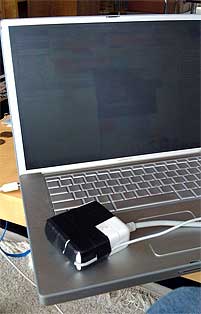 Apple Computer had already announced that there are problems with power bricks for the old PowerBook and iBook computers (now officially discontinued) – the small cord coming out of the brick (carrying low voltage) is under a lot of stress and strain, and can short out right where it comes out of the brick’s case. So I was kinda ready for this intellectually. My brick is carried in my backpack almost every day, with the cord wound around the brick, and I can attest that the stress at the point where the cord comes out of the body of the brick hasta be a factor in weakening the cord, even though I’m always careful. Over the course of four years, being coiled and uncoiled every day, that’s thousands of flexions we’re talking about.

So on Saturday, I was sitting on the floor using my computer, with an external LCD monitor attached to it (also sitting on the carpet), and noticed a plume of smoke rising from the top of the monitor. I thought a little bug had probably crawled into the monitor and been tazered to death by a high-voltage supply. But I noted the acrid electrical/plastic smell of the smoke…which didn’t really smell like delicious fried bug.

It was only on Sunday that I put 2 + 2 together after I took a look at the cord on my power brick. The brick had been sitting beneath the LCD monitor, and the small cord on the “low-voltage” side of the brick was burned to a crisp. The smoke had nothing to do with the monitor – it was the cord on the power brick. No wonder I smelled plastic melting! I had lived thru a tiny electrical fire.

I looked up a replacement power brick online (I got one for an ancient iBook a few months ago), and found that the cost of replacement would be around $90 for an Apple-branded power supply. Bad luck.

So, being an old amateur radio operator (since I was 12 as K9KYI, now W6SNP since 1976), and having no fear of the soldering iron, I dug out my wire cutters, strippers, solder and soldering iron, and ripped apart the silicone sleeve where the cord connected to the body of the brick. Used to, I should say, because now it was a blackened mess of tiny twisted metal wire and melted/charred plastic insulation.

Luckily, I found the manufacturer had squirreled away a twist of cord inside the brick itself (an internal “strain relief” knot), which I untangled, and was able recover about an inch of good wire. I cut, stripped and soldered. Then I taped it all together with black electrical tape acting both as glue and insulation, and wrapped the same black tape around the body of the brick to hold everything in place. (I never did complete the disassembly of the brick – turns out I only needed to get into the body thru the hole where the wire enters. And the power supply now works as well as it ever did.

The only problem I anticipate is that the adhesive on the in-side of the tape may begin to melt and ooze because the brick does get warm (but not hot) after a few hours of operation. And mine is in operation about 16 hours every day.

Others have reported similar problems, and have made similar repairs to the one I made. Apple forums are full of reports of smoking cords. So this isn’t unusual. But I’m very happy I avoided setting the carpet on fire.

iPhone nuggets – your own ringtones