Rosemary Rawcliffe and I met a few years ago. She had been working on her Women of Tibet trilogy for just a couple of years.

In 2005 or 2006 we ran into each other again at the Tibetan settlement in Dharamsala, India, and we were soon talking about ways we might help students learn to use video and film to preserve the stories of the older Tibetan refugees and, for that matter, their own stories!

Now, of course, Rosemary was the pro, and I knew little about film and video. (I had taught beginning video production at one point, using 2-inch Ampex video tape editing and huge video cameras, but that was ancient history, and it certainly wasn’t my profession.) 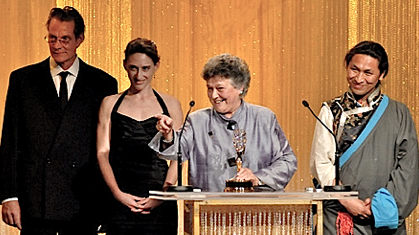 She has now completed two of the films… and the second film, Women of Tibet: A Quiet Revolution was just awarded a 2009 Emmy® in the category Historic/Cultural – Program/Special at the 38th annual 2008-2009 Northern California Area Emmy Awards. You can read her story (and see photos) about the awards ceremony at the Women of Tibet web site.

Rosemary had built a career in film and television in Britain, but in 1989 she sold her business and took a break from the profession. As she said “you wake up one morning and you have 35 people working for you…” and your ability to choose which creative tasks you want to take on is greatly reduced.

But because of the breadth of trades she had plied while in the business, she knew everything from audio to video, and knew how to finance and build a team, and ten years later she was so moved by the plight of, and the courage of, Tibetan refugee women, that she began filming to tell their story. Two films later (with one more to go), she now has an Emmy, which is both a recognition of her own efforts and a statement of respect for the stories and the lives of the women she is chronicling. And she is thrilled to be recognized in this way by her peers. You’ll recognize what this means to her when you listen to the interview.