You are here: Home / Interviews / A National Peace Academy 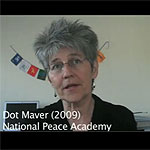 In the newsletter of The Dalai Lama Foundation for March, 2009, we announced that the second stage of a process leading to the founding of a U.S. National Peace Academy had been concluded at Case Western Reserve University. At this 3-day event, in a process called appreciative inquiry, a group of over 170 people explored the dimensions of the potential academy, and formed working groups that will bring this dream into reality.

Dot Maver and Mike Abkin visited the Foundation shortly thereafter, and they described, on camera, the Academy and some of the aspects of its founding. We have integrated these interviews into our Many Paths to Peace learning modules at The Dalai Lama Foundation’s online Learning Zone. [View the interviews online. If you’re not registered for the Learning Zone, you can click guest when asked to log in.]

The Academy will focus on four cornerstones: 1) peace education; 2) peace research; 3) peace policy; and 4) peace action. According to Dot Maver, “It will be self-organizing rathern than an organization. It will be a learning institution, as well as an institution of learning.” In three video segments, Dot and Mike describe the Academy and the process that will be used in developing its activities.

Just to get you started, here’s the interview with Dot Maver about the National Peace Academy.

WiserEarth- Finding organizations you can work with

University for Peace & the Earth Charter