You are here: Home / DesignWare / Computer Based Education 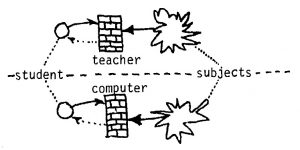 Chapter 3 of 7 in the DesignWare history thread.

So as I developed my LINGO language (not the Macromind one, which came later) I was focused on how to “represent” an interaction between human and computer. That is, I wanted to be able to write, using a software language, a script that could be followed by the computer in teaching a subject, or in some fairly constrained type of interaction with a human.

Programmed Instruction was a logical place to begin, and I read up and built and tested a lot of PI materials during my few years of developing LINGO. In the process I created a canonical language in which I felt I could write these interactions. And I tested different ways that the computer could try to determine whether the human was giving a correct answer (or even making a request the computer could understand) to a question it had posed. This is similar to what interactive voice response [IVR] telephone systems do today with voice inputs. 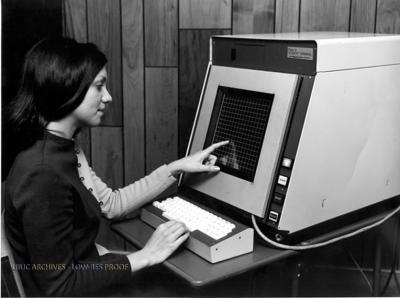 By 1969 the PLATO-IV system had become a stellar example of a computer system with remote terminals supporting computer-based education. It had a whole ecosystem, which is well-documented elsewhere and I won’t belabor, that was truly mind-expanding. It had teaching. It had messaging. It had interactive groups and its Notes system that was essentially email in real time. Email on its own didn’t yet exist. It was close to having computer conferencing.

I want to call out many kudos and much credit to Don Bitzer and Paul Tenczar and Bruce Sherwood and other heroes of PLATO-IV who I knew personally in those days. Many thanks for the pioneering work they did! 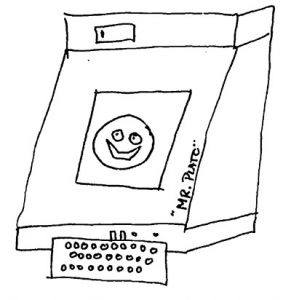 My LINGO interest turned into a new system MULTITUTOR, which accepted the TUTOR-IV language of the PLATO system, yet ran on our local CDC 6400 computer. PLATO-IV required a dedicated computer and was wicked fast. MultiTutor ran on a multi-purpose system, was slower, but had the necessary capabilities. And it worked with many types of computer terminals, whereas PLATO-IV was designed for its own specific computer terminal. (My idea was to broaden the appeal of these systems, though sometimes I know it was seen as competitive. Ultimately we had somewhere between 15 and 25 institutions using MultiTutor – sorry I don’t remember the exact number.)

My interest was in universality. I did not want these systems, which I felt had the potential to revolutionize communication (and learning) to be limited to large university or commercial systems. I wanted them democratized. I wanted to see them everywhere. I wrote about neighborhood centers. I predicted people would live at home, then go over to the center to co-work, leaving the kids there at on-premisis daycare, and socialize over lunch as well as work at terminals. There would be supercomputers, but the users would be everywhere. By 1972 or 1973 this had become a central theme of my writing and development. How did I know this would happen? I had a teletype-like portable terminal in my home, of course down in the basement in a room specially allocated, with a second phone line (unheard of in homes in those days) just for the terminal to call the supercomputer.

And then I noticed that computers were getting even smaller. The KIM-1 became the first home computer kit (that I know of). By 1976 it was on the market, with minuscule memory, and a terrible programming interface, but it was tiny and shone a light on what might be possible. In 1976 I moved my base of operations from Northwestern to University of the Pacific in San Francisco, where a PDP/11-47 computer was installed for the project where I was to build an online course structure for a program in respiratory therapy. (Long sentence there.) My LINGO language had evolved into MultiTutor. MultiTutor had spawned a complete rewrite as the Courseware Design System [CDS]. CDS was a hierarchical system in which the canonical language of interactions could be turned into executing computer code for dozens of target time-sharing system with thousands of terminals. With support from the National Library of Medicine, we made CDS available to all. It ran on system supporting the BASIC language, Fortran, PILOT and probably some others. It had real-time translation capabilities so it could export its own programs in any of these programming languages. And I had begun to go graphic, so programs could be expressed as flowcharts. This visual kind of language was a key concept in the AuthorWare language and system of Michael Allen — I don’t know which of us thought of it first, and maybe we weren’t even first. (The article says Authorware was begun in 1989, but my time in trying to go visual was from 1975. I think Michael was into this long before 1989.)

So here we are in 1975 to 1979 and computers are getting smaller and smaller. Curiouser and curiouser. What will be next? [Read on in time…] [Or return to the start of the story]