You are here: Home / Organizations and Sociology / Cyber-nomads / On again, off again, the future of connectivity 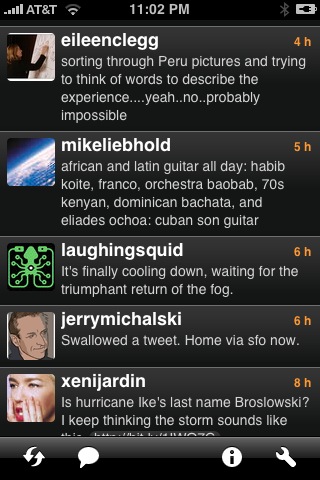 If you live in the US and a few other parts of the world, you might think that “being connected 24/7” is the future of the entire world. That we will have mobile communication and memory and computing devices with us everywhere we go and that they’ll be connected to the network and consequently the rest of the world, at all times. That the world will be Twitter-like. Especially tweens may think this way. I suppose that US tweens don’t even think about there being any alternative. They’re just connected and that’s the way it is.

Well, there are more than a few barriers to “being connected 24/7” which lead me to believe that our real connectivity model will be “on again, off again.” And that what developers need to focus on is memory/computerpower that is self-sufficient and can operate standalone most of the time, but can instantly “sync” itself to the rest of the world when a connection is available. If you have a PDA or iPod or practically any device that utilizes large files, you’re already acquainted with the term sync.

I know I’m not the only one thinking about this. Vis the (last month) announcement of the Kindle, an e-book reader on steroids, that syncs itself whenever it has a network connection and otherwise doesn’t seem to care. (I’ve used e-books for years, but in the form of downloaded files and “reader” software on my computer.)  Groove, which I haven’t used for a couple of years, also had this kind of model – opportunistic syncing. Google Docs (documents) currently works only when you’re actually online, but there’s lots of talk about how to enable it for offline work, including perhaps a big Ajax (Ajax==”lots of javascript on the browser side manipulating DOM objects”) effort that would allow offline work that would later on upload to the big server in the sky. And I’ve blogged already about Ecto and other tools that let you create blog entries while offline and then upload them when you’re connected.

What’s the real future? Well, it’s obvious to me. Ultimately we’ll all carry devices that are capable of functioning “quite well” in standalone mode, but which sync up whenever there’s connectivity, refreshing information from the network while at the same time updating our own information on the net. Remember in 2013 to remind me of this and see if I was right.

How much does proximity count?

Effective use of Electronic Devices in Meetings