You are here: Home / Debris / Values-based education in Nigeria

My friend Emmanuel Ande Ivorgba was a high school principal in Jos, Nigeria, when I met him electronically, by email five years ago. He connected with us at The Dalai Lama Foundation and his energy and enthusiasm so appealed to us that we immediately began working with him to find ways his students could communicate with other students around the world.

One of those ways was Project Happiness. Emmanuel’s school became the third “leg” in the triumvirate of founding schools in that project. 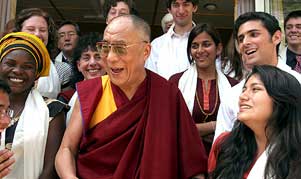 In 2007, Emmanuel joined us in India, along with Tibetan exile students and a dozen students from the US who were participating in the project. We traveled to Dharamsala, where the students interviewed the Dalai Lama. This was a paradigm-altering meeting for Emmanuel.

He returned to Nigeria where he founded Creative Minds International Academy, a values-based institution.

Oh—what prompted my writing this article right now is that some of his supporters are returning to Nigeria soon to deliver more computers and other needed supplies. The Voices of Angels Foundation arose from the communications and activities I mentioned above, and are now providing a computer lab provisioned with eGranery. Listen, watch, and then go read up (better yet—make a donation to support this work).